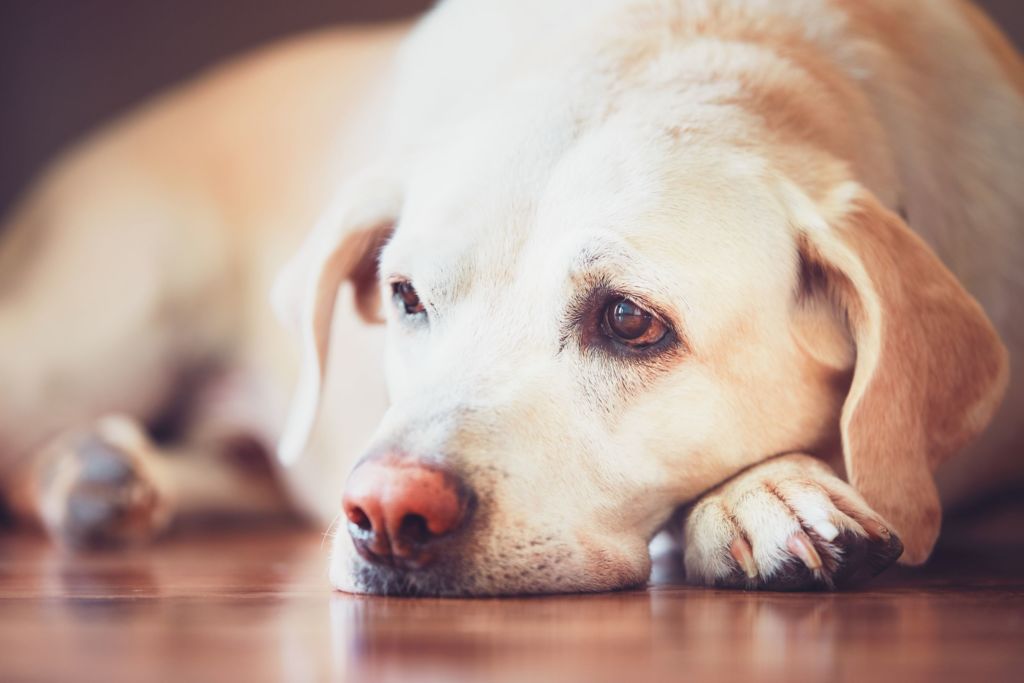 While depression in dogs may sound like an internet phenomenon, it is, in fact, a serious medical condition among canines in Australia. As psychologist Jonathan Rottenberg once said, “our fellow mammals…provide the most compelling and dramatic evidence for depression in the animal kingdom”.

With pet ownership rising across the country, what do we need to know about depression and how it is caused in our pets? Of equal importance, how can plant-based medication like cannabidiol (CBD) help in treating this condition?

In our blog article this week, we dive into the specifics of canine depression and uncover how emerging CBD treatments may be effective in returning our pets to full health. Continue reading for a closer look.

What causes depression in dogs?

Much like humans, there is a variety of causes for depression in our companions.

Physical illnesses, in fact, can cause your dog to become depressed. The only way to confirm this, however, would be to visit a vet and pursue treatment options for physical symptoms, without approaching depression as a standalone issue.

Similar to how we process grief, dogs may also slip into depression as a result of any kind of bereavement or loss, whether this is temporary or permanent. Certain environmental changes can also cause depression in dogs, although this will undoubtedly vary between each pet. Whether this is a change of scenery or a change in the weather, these can take a toll on a dog’s mental health.

Certain phobias and fears can also cause depression in dogs. Given that each pet reacts to fear in a different way, it may often be difficult to pinpoint the exact problem. Nonetheless, fear can be a trigger for this condition.

Because dogs are highly empathetic creatures, their mood may also shift depending on the wellbeing of their owners. If you’re exhibiting signs of depression, it’s possible that your dog may mimic your mood. Separation anxiety could also be the cause of this problem, although instead of acting out, your pet may just become depressed.

What are the symptoms of canine depression?

Among the many signs that can be characterised as depression, Ruttenberg identifies the following behaviours among dogs with depression:

Apart from this, other signs also include changes in appetite, a longer time spent sleeping, and paw-licking – a sign that your pet is trying to soothe itself.

Does CBD alleviate depression in dogs?

Despite the fact that CBD may not be a conventional treatment for depression, it does have a history as an antidepressant. From as early as 1621, there is evidence that hemp seed was recommended for curing depression among humans.

When it comes to treating our pets, CBD has demonstrated an effect on more than 65 different types of chemical receptors throughout the brain and body, including serotonin receptors. When our bodies produce fewer endocannabinoids, which are responsible for regulating mood, CBD can be used as a supplement to enhance the effect of these compounds. This is because it is capable of activating the same cannabinoid receptors as the endocannabinoids themselves.

For this reason, CBD may show promise as a potential remedy, not just for canine depression but anxiety as well.

It’s important to note here, however, that while CBD may reduce the symptoms of depression in pets, it may not treat the underlying condition itself. For this reason, consulting a vet is necessary in order to treat depression in dogs in a holistic manner. Given that CBD is considered to be non-toxic and non-psychotropic, it is generally considered to be safe for canines and may present pet owners with an opportunity to administer a form of relief.

It’s important to note, however, that, to date, there are no fully legal and compliant products available to treat animals using cannabinoids, either under the United States Federal Food, Drug, and Cosmetic Act or as regulated by the Centre for Veterinary Medicine.

“The 2018 Farm Bill will impact animal supplements/treats by removing the U.S. Drug Enforcement Administration (DEA) from having authority over hemp cultivation or products that contain hemp (including plant parts and derivatives) as an ingredient. Although that is a positive development, the Farm Bill will not make hemp or hemp derivatives (CBD) approved for use in animal feed/food.”

Depression in dogs is a serious medical condition that affects thousands of canines around the world.

As greater research is conducted into CBD as a medical treatment for pets – part of our work here at CannPal – canine depression may become more treatable in time. Until such time, staying alert about our pets’ moods and behaviour is important in order to ensure they’re living healthy and fulfilling lives.

Cannabidiol may be a complementary treatment at this stage, however, it’s important to review the legalities in your state and be fully aware with the risks associated in providing your animal with an untested and unregulated product.